The Charleston City Market Gets a Facelift

COME SEE HOW OLD wrinkles have been removed for a smooth new downtown experience.

Charleston’s old City Market area has undergone a complete facelift. Buildings dating as far back as 1804 have been repaired and restored to their former glory, along with a few modern touches that enhance, rather than detract from, the look and maneuverability of this busy Charleston landmark. Always the center of attention, over the last three decades, the Charleston City Market had deteriorated and become rundown. During the busiest times, it was difficult to navigate or to even see the wares presented by local vendors. It had become less than inviting.

What's in walking distance of The Charleston City Market?
In 2008, Hank Holliday, Steve Varn and Laurie Thompson formed the City Market Preservation Trust, taking over management responsibilities. “It’s a top-down renovation. New roof, bricks, lights – everything,” said Holliday, who owns about 300,000 square feet of property in the area, including three hotels, four restaurants and two parking facilities. “It was a general cleanup at first. It was easy to see that something needed to be done.” 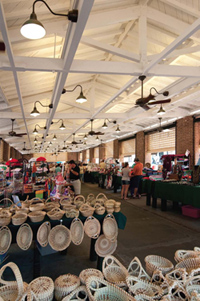 Because Holliday and Varn own so much property in the area, renovating the Market was in their best interest, as well as that of the scores of vendors and shop owners who depend on the foot traffic in the area. Over the last few years, the number of locals visiting the City Market has dwindled for a variety of reasons. And while visitors continued to shop the market, Holliday looked toward the future and, with his partners, began to formulate a plan to make improvements, not simply clean up the Market.

The three open-air buildings have been completely renovated. Historic portions were restored, including adding new mortar. Roofs were repaired and replaced. Cement slabs were replaced and the blue stone re-laid.

“Decorative but functional lighting was installed,” said Barry Newton, general manager of the City Market. “We’ve added ceiling fans, and we’ve added restrooms to ‘C’ building. Historic photos show counters facing out into the street, so we put counters between the brick columns, which allows vendors to sell to the outside.”

In addition, Newton said the pedestrian walkways in the open buildings have been improved dramatically, opening up views and relieving the congestion for shoppers.

“Tables were originally set up on both sides and the middle,” Newton said. “Those middle tables have been removed so there is now a wide center aisle.”

Although the project has been somewhat stressful to the vendors and merchants, early reports are positive.

“I’m excited about the renovation,” said Arlene Branham, owner of Taycours, located inside the original building. “It has been much needed for many years. The environment is so much nicer for customers. And the permanent walking area is much more pedestrian-friendly.”

A market merchant since 1975, Branham said the renovation “keeps us fresh.” With a wrought iron gate embellished with “Welcome to the Market,” the City Market will have a real entrance, she said.

The final stretch of the renovation continues through the end of 2010 and is expected to be complete in the spring of 2011, at a total cost of about $5 million. The head building, which has enclosed shops, will be closed for several months while the shops are gutted. As with the open-air buildings, mortar and cement slabs will be replaced. This building also will have a skylight.

“We will rebuild and current owners will have the first option to come back,” said Newton. “We’re really excited. More than ever, the market is now one community.”

Holliday concured, saying, “I think the merchants are happy. They’re making more money. The Merchants Association has a marketing plan in place.”