The city of charleston, South Carolina, prides itself on preserving its unique history and Southern culture while graciously welcoming visitors from around the world. The Palmer Home Bed and Breakfast is a wonderful example of the citys preservation of the past and its Southern hospitality.

Located at 5 East Battery across from the Charleston Harbor, the Palmer Home, also known as the Pink Palace, is one of Charlestons most renowned homes. Opened to the public in 1977, it is also the private residence of third-generation owner Francess Palmer. She and her dedicated staff welcome guests year-round, sharing the homes story with all visitors.

The house was built in 1848 by John Ravenel, a wealthy rice plantation owner and the head of the South Carolina Railroad. Built as the Ravenel familys city home, it consists of 30 rooms and 10 bathrooms totaling 18,000 square feet.

The home was rebuilt after the 1886 earthquake that damaged most of Charleston, designed by the Ravenels in the Italianesque style that was popular at the time, with peaked window cornices and two side piazzas that catch the Southern coastal breeze. 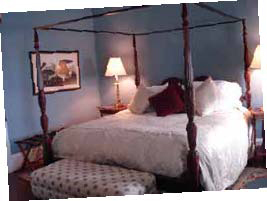 The interior of the home has remained largely unchanged. It boasts black marble mantels around the fireplaces in every room, as well as Greek revival acanthus decoration, plaster ceiling medallions, black cypress wainscoting and original mahogany banisters on each of the five stairwells.

The home is furnished and decorated with family heirlooms and antiques that tell the story of its 163-year history. One of these historic items is the drawing room chandelier, which not only survived the 1886 earthquake but also was the first chandelier in Charleston to be wired for electricity. The entire home had electricity before the White House did.

The drawing room, which is used as the main room for entertaining, features a Levistan Kirman rug that is more than 100 years old and an 1849 Chickering piano.

The Ravenel family also bought the adjoining lot to the left of the house because Mrs. Ravenel wanted a garden. That same garden is often the site for wedding ceremonies. The first in-ground pool in Charleston was built on the lot, and guests take advantage of this amenity on hot summer days.

The John Ravenel House became the Palmer Home in 1949 when Dr. Joe Sam Palmer saved it from becoming condominiums. Francess Palmer grew up there and remembers it as a place of fond childhood memories. 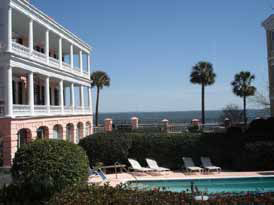 The house has and always will be a family home, she said. Growing up we would have formal family dinners every Sunday, where the women wore Sunday dresses and the men wore coats and ties. While the meal was formal, the kids were always able to run around and have fun. All of us had our debutante balls and weddings here as well. It is still a place where we gather as a family.

Palmer Home visitors are made to feel like family through the hospitality of Palmer and her staff. Guests enjoy a full Southern breakfast every morning and relax on the piazza for wine and cheese in the afternoon. For more information, visit www.palmerhomebb.net, or call (843) 853-1574 for reservations.